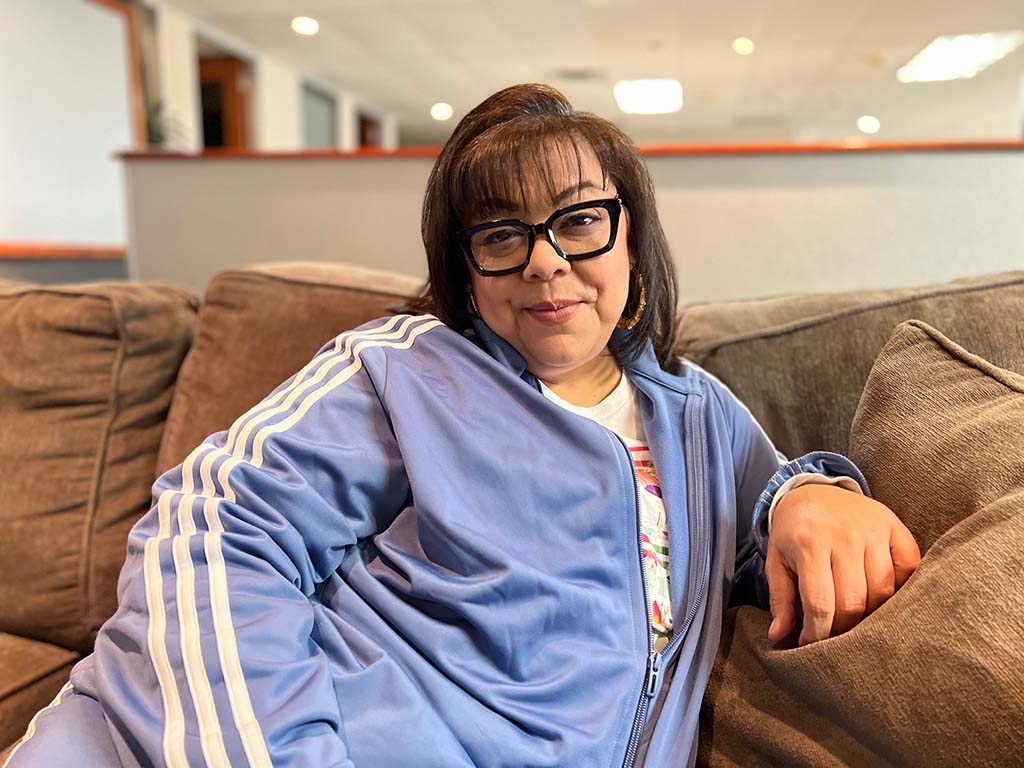 Marisa (Spanish pronunciation muh-RIH-suh please!), AKA Da Traffic Boss Moss and the Player of South Pasadena, is AMG’s Production Manager and resident home girl with street cred all the way from Los Angeles. She brings contagious energy and laughter to AMG as she keeps track of project schedules, sends out media to vendors and does pretty much anything else that needs doing. Marisa’s our behind-the-scenes superstar with a fascinating itinerary from the hoods of LA to the halls of AMG.

Rumor has it Marisa was born wearing one of her signature Adidas track suits in a little neighborhood called Highland Park. If not, she started sporting them soon after on the scenes of South Pasadena, where she went to high school. Her innate desire to stay in style pushed her to work in retail at age 16 in the fashion district, and to attend the Fashion Institute of Design and Merchandising. She hoped to be a fashion buyer, but a branding class she took set her life on a whole different course.

Intrigued by the concept of building brands, Marisa took a leap of faith and applied for the receptionist position at interTrend, an agency that represented the Asian market for clients like Disneyland and JCPenny. She rocked the interview so hard they straight-up gave her the executive secretary position. But she would go on to work in the accounting, PR and media traffic departments, eventually becoming an account coordinator. She fell in love with the hustle and luster of it all.

“Everywhere I’ve worked they see my energy and potential and give me more and more responsibilities. Over the last 27 years, I’ve done almost every position in this industry.”

At some point, we all have a now-or-never moment to decide if we’re going to give our dreams a shot, and Marisa took that leap in 2004. This time she followed a die-hard passion of hers – promoting music. She started her own business, Lollipop Marketing and Entertainment, doing PR and distribution for local rap and hip-hop artists in LA. She gave it three incredible years before deciding to move on. But no regrets, she has unreal stories to tell, like catching shuteye on the floor of 36 Chambers Wu-Tang Clan Studio in New York City.

The 2007 recession prompted Marisa’s move to San Antonio to find a job. But to her great discouragement, she was told time and again, “you’re never gonna find traffic jobs in San Antonio.” She was patient to prove it otherwise and got involved in her local church teaching Sunday school and creating bulletins. Her church connected her with a job in a call center while she waited for her opportunity.

After finishing a crazy-busy stint with Total Traffic & Weather Network as Lead Contract Specialist, Marisa interviewed with KSAT three times to no avail. But KSAT sent her résumé to AMG, which was nothing short of a miracle from God for Marisa, and the full fleet of her skills were tested right away.

Marisa was a workflow whiz by this point and handled AMG’s traffic schedules like Tim Duncan handles a basketball. But then an AMG legend named Tom Sullivan pushed Marisa to learn something new – print production, which was a man’s world. Tom once put it this way to Marisa, “Can I teach you print production in case I get hit by a truck?” Marisa dived right in, and when we suddenly lost Tom to cancer a few months later, she had big shoes to fill. But she learned the print game fast and came into her own as Production and Traffic Manager, which had never been done before.

“I love that AMG is small enough to be a tight-knit family, but we’re not micro-managed. If I say something about my craft, it’s respected. That didn’t happen other places. We can express our minds here and that creates an amazing work environment and amazing work.”

Marisa’s the glue of the agency, making sure our work holds together internally and helping it stick to vendors externally. Need to procure promotional stress balls? Marisa’s your girl. Where’s this, when’s this due, do these clothes match? Just ask Marisa. There’s no Addy award for slick media trafficking or fielding calls on the weekend to make sure our spot goes on the air, but maybe there should be. For all her work putting out fires no one ever sees, we are grateful to have a cool head like Marisa on our team.

Jacklyn of All Trades

Marisa’s epitaph will read something like “The girl who died tryin’.” And you know that’s right. This mama does it all – running Airbnbs, podcasting, helping her cousin manage a production studio, shooting music videos and filming her own cooking show. Her hustle halts for no one. She goes hard for her family and hard for her Christian faith. And the girl’s got plans. Hear her tell it:

“I always got a 5-year plan. I have scripts written, I want a Netflix series, my TikTok channel will be creating meals that feed five people for under 30 dollars. There’s so much I want to produce. I’m not done.”

Bucket List: Go to Prince’s Paisley Park Studio in Minnesota
Favorite restaurant: Thai Dee
Guilty Pleasure: Fried food
Little known interest: Stage-Shy Comedian
Favorite quote: “Be your own biggest fan, your own biggest believer, and put it on your back and carry the weight.” – Nipsey Hussle