For over 20 years, the Valero Alamo Bowl has provided college football fans with some of the most exciting games of the bowl season. The game showcases two of the premier conferences in the country, featuring the #1 Pac-12 team against the #1 Big 12 team after the College Football Playoff selections.

Previous lead capture attempts were limited to promotions publicized via the website which relied on traffic to alamobowl.com, and did not produce the desired numbers or engagement opportunities.

The Valero Alamo Bowl wanted to give away prizes outside of the typical t-shirts, trinkets and tickets for the event. They were able to gather up some sweet prizes such as a GoPro camera, Luke Bryan concert tickets and Valero gasoline gift cards.

AMG recommended branding the promotion and driving it exclusively through sponsored Facebook in-feed posts. This allowed the Valero Alamo Bowl to identify individuals outside of their current followers. The sponsored post not only targeted individuals in the San Antonio DMA, who were most likely to be interested in advance ticket purchases, but also hardcore college football followers, targeting fans of Big 12/Pac-12 football, as well as more casual football and special event fans in the area. 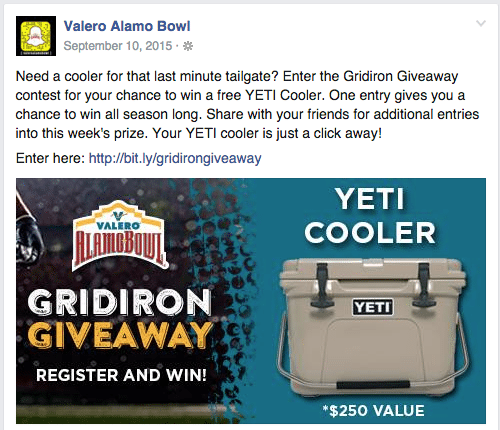 Sponsored posts included a branded graphic that featured the weekly prize giveaway linking back to the Facebook registration page. Participants were also encouraged to share their entry posts for additional chances to win. 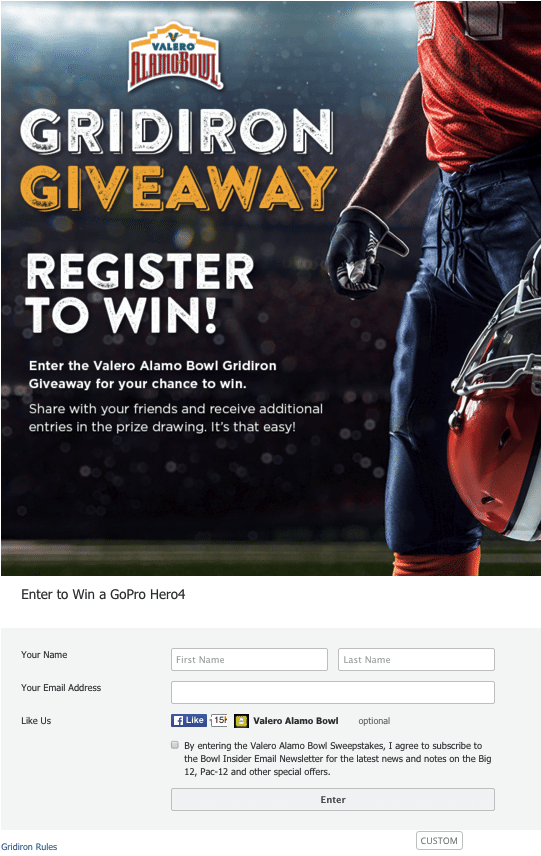 In order to qualify, individuals had to fill out a simple online registration form that required a name and email address. As part of the registration process, contestants acknowledged their consent to receive future marketing communications, thus giving the Valero Alamo Bowl new prospects.

Winners were selected randomly on a bi-weekly basis over the course of the promotion.

Beyond this game, the promotion produced a new level of interaction with the Valero Alamo Bowl’s Facebook fans, driving engagement with an off-season promotion that produced 946 new likes, 1,700 shares and over 17,600 visits to their site.