On August 25, 2017, Hurricane Harvey made landfall in Port Aransas, Texas. After a day of heavy winds, torrential rainfall, and devastating flooding, Harvey left the Texas Coast in bad shape. Homes and livelihoods were destroyed. Even the AMG team was affected. Janet Hancock, Media Planner & Buyer, lost her condo in Rockport, Texas, and Reed Hartman’s family in Port Aransas lost their home as well.

“The Cavender family came to me and said they wanted to help the relief effort in any way possible,” said Julius Germano, Account Executive for the Cavender Auto Dealerships and COO of AMG. Luckily, he had recently heard about a concert that George Strait would be performing at the Majestic Theater. All the proceeds of the concert would go toward Harvey relief. 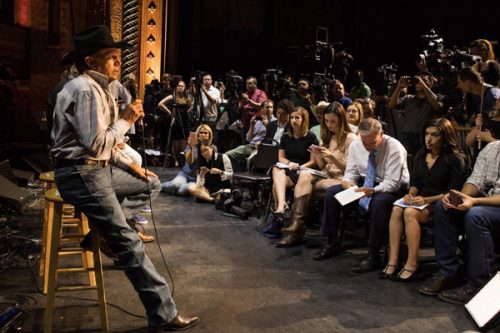 Having worked with Strait before, The Cavenders jumped on the opportunity and assisted in underwriting the concert. In an effort to drive ticket sales and donations, AMG and Shootz Production group helped them produce two television spots to air before and after the benefit. Every member of the team was proud to work on the project.

“We had a busy couple of weeks,” Julius said. “It was a whirlwind putting everything together.”

But that’s not all the Cavenders and AMG did. Each dealership gathered donations, and the AMG team collected a carload of diapers, food, and water to donate to the food bank.

Hurricane Harvey may have proved devastating for the Texas Coast, but by working together, we can help the affected families as much as we can. If you’re interested in donating to Rebuild Texas, the fund dedicated to helping revitalize the smaller communities around the Texas Coast, you can donate at https://www.rebuildtx.org/.